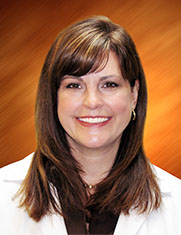 Dr. Lynlee Wessels spent her childhood in Steger, Illinois. After graduating from Marian Catholic High School, she attended Eastern Illinois University where, in 1992, she graduated with a Bachelor’s degree in zoology. In 1996, she graduated from the University of Illinois College of Veterinary Medicine, where she concentrated her studies on small animal medicine and surgery.

Her dream of opening her own practice became a reality with the grand opening of the Animal Wellness Center of Monee in September 2004. Dr. Wessels resides in Green Garden with her husband Scott and animal kids. 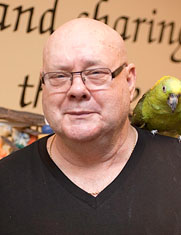 Ed has over four decades of functional management experience in the chosen fields of finance, logistics and project administration. He graduated from Governors State University with a Bachelor of Arts degree in business administration. In 2003, he and his favorite daughter pledged their expertise and assets to develop and operate the state of the art Animal Wellness Center of Monee. Ed lives in Crown Point, with Patricia and two canine friends. 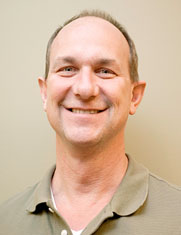 AWCM welcomed Scott as a member of the staff in August, 2012. Scott is originally from Northwest Indiana and was employed for over 20 years in the printing industry working in electronic pre-press. He has a degree in Technical Management, as well as Electronics and Computer Technology, both from DeVry University. Scott is the proud dad of three dogs. 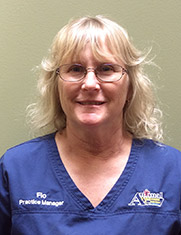 Flo joined Animal Wellness Center as our new practice manager in 2019. She has been working in the veterinary management field for over 30 years. Flo enjoys being part of our wonderful, caring and professional animal hospital. She states she has found her permanent work home here with us. Flo has four children and 4 grandchildren. In her free time, Flo spends time with her family and wonderful group of high school friends. She also travels and loves to see movies in the theater. She is a loyal Bears and Blackhawks fan and going to games is the highlight of her Fall and Winter activities. Flo has had many pets throughout her life and her children were all raised to love and respect all animals. Currently she has 3 dogs, Olivia, Bambi and Daisy, along with Kiwi the Cockatoo. Her favorite past time is to snuggle at home with her dogs while enjoying a great Bears game. 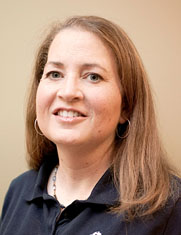 Donna grew up in Steger. She worked for 12 years as a pharmacy technician until an illness forced her to resign. She returned to work when Animal Wellness Center opened its doors in 2004. She currently resides in Monee with her husband, Mike, and her dog, Lexie. 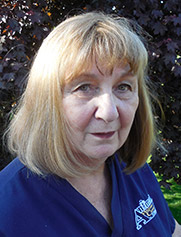 After raising four sons in rural Illinois, Patricia has spent nearly two decades as a nurse managing the medical care and wellbeing of geriatric patients. She now extends her good will by volunteering at AWCM with care of animal patients in need of medical treatment. 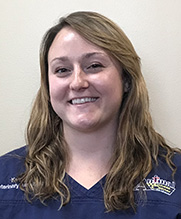 Kasey grew up in Herscher, Illinois, and received her education there. She graduated from Herscher High School in 2013 and moved to Manteno, IL where she met her boyfriend James. They have 2 cats, Morty and Phoebe.

Kasey knew she was working in the right profession when she started at AWCM. She is excited to come to work every day. It is so rewarding to her to be able to help those who do not have voices.

She has two stepchildren, Maddie (6) and Brady (10) that keep my life exciting. She enjoys cooking and playing tennis in her free time. 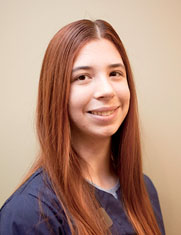 Lindsay currently lives with her five dogs (Ace, Calypso, Spunky, Emily and Little One) and six cats (Alexander Trager, Darth Vader, Dobby, Ganon, Pike and Waffles). She also has a passion for exotics. Along with breeding Ball Pythons, she keeps various species of snakes, tarantulas, cockroaches and other invertebrates. 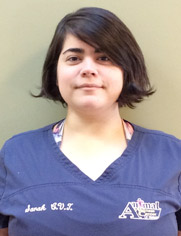 Sarah is a Chicagoland native that graduated from Parkland College in Veterinary Technology and from the University of Illinois with a bachelor’s degree in Animal Science. After working as a certified veterinary technician in Champaign for several years, she now resides in Monee with her cat Jumbo to be closer to family. 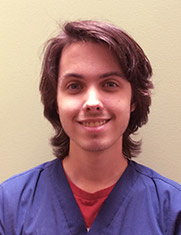 Will was welcomed to Animal Wellness Center as a certified veterinary technician in early 2020. He is a lifelong local resident and recent graduate of Fox Veterinary Technical College. Besides his passion for animal care, medicine and surgery, he spends his free time playing board/video games and skateboarding with friends. 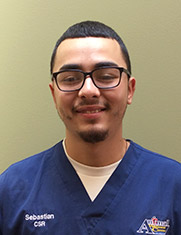 Sebastian joined our team in 2019. He is a resident of NW Indiana and started working in the veterinary field right after graduating from high school. The first dog he added to his family was a small Pitbull named Suzy. He has since added two more Pitbulls named Nike and Barka , that are also in love with Suzy. Sebastian is a jack of all trades. He not only is our customer service representative but also is a fantastic veterinary assistant. In his free time, he works on his Jeeps, plays with his dogs and also oil paints. 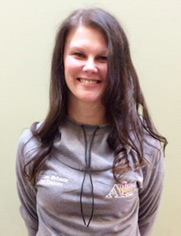 Jillian grew up in Bolingbrook attending Benet Academy in Lisle and graduating in 1997. Furthering her studies, she played soccer at Saint Xavier University while she earned her B.S. in Business. In her spare time, she began volunteering for Reach Out Rescue where she helped with fundraising and walking the dogs in kennels.

Through volunteering, she realized she wanted to help people improve their relationships and experiences with their pets to help keep dogs out of shelters. She also decided she needed a dog of her own and adopted her beloved Camper, a Shorkie (Shih Tzu / Yorkshire Terrier), from PAWS Chicago. She began training with Camper and a short time later Camper earned her Canine Good Citizen Title. Jillian was then offered a job as a dog trainer and fell in love with the ability to help others through training.

Jillian believes positive reinforcement training creates an excellent bond between a dog and its owner and continuously training with your dog leads to improved socialization. “Socialization doesn’t mean just being good with other dogs….it’s new sights, new sounds, new smells, and new people.” 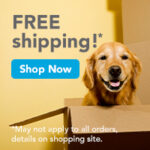 © 2022 Animal Wellness Center of Monee. Designed & Managed by ViziSites. Terms of Use.